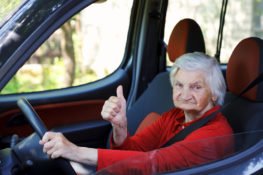 Among the more well-known stereotypes about the elderly in America is that they pose a significantly higher risk of causing automobile accidents than younger drivers. Much has been written and said about how older drivers often see their driving skills diminish as they age, resulting in slower reaction, poor decision-making, and even confusion. Still, stereotypes deserve to be questioned, especially when they can lead to faulty assumptions that may serve as the foundation for bad public policy. So, is there an increased risk posed by elderly drivers with diminished skills?

Make no mistake; this is an issue that deserves to be examined, particularly in light of the changing age demographics in the United States. In 2001, drivers over the age of sixty-five comprised only fifteen percent of the driving population. According to a Rand report, that number is expected to swell to twenty-five percent by 2025, as the Baby Boom generation continues to reach retirement age.

That same study found that elderly drivers were sixteen percent more likely than younger adults to be the primary cause of an automobile accident. While that sounds like a major difference, some perspective is definitely in order. The Rand research also revealed that the youngest group of drivers is actually 188% more likely to cause a crash than their adult counterparts. That fact demonstrates just how difficult it is to just assume that elderly drivers pose a significantly higher risk to public safety on the roads and highways of the nation.

More importantly, experts agree that the decision to give up those car keys can have a negative impact on the elderly, both in terms of physical health and mental acuity. The AAA Foundation for Traffic Safety found elderly drivers who stop driving altogether suffer depression at twice the rate of senior drivers who manage to maintain that important independence. Worse, there is a fivefold increase in the likelihood that they will end up in some sort of assisted living or another care facility. Obviously, every effort should be made to enable these drivers to maintain as much independence as possible to avoid those ill effects.

What Changes Cause Diminished Driving Ability?

It can be helpful to understand why older drivers often suffer this diminished capacity, and why it can be so difficult to determine exactly when any given person is no longer able to safely drive. It is true that there are physical and mental changes that occur as part of the aging process, and these changes can cause an impairment of driving ability. The problem is that all of these changes – physical changes like impaired vision and diminished motor control, as well as cognitive deterioration – lack any sort of discernible and predictable pattern of progression.

For some elderly drivers, these changes occur early in the senior years. For others, they never manifest in any serious way. When they do manifest, however, impaired vision, slowed reaction times, poor cognitive functions, and even the influence of various medications can all create a higher risk that an accident will occur.

In Texas, the law takes these concerns into consideration through testing requirements. The Texas Department of Transportation has long maintained a commitment to ensuring that as many senior drivers as possible can continue to enjoy the benefits of mobility and independence that a driver’s license provides. At the same time, the Department also has testing requirements designed to protect those drivers and others on the state’s roads and highways.

For Texas residents age 79 or older, renewal of a driver’s license must generally take place at a nearby DOT site. Because health situations can change rapidly as we all get older, drivers who are older than 85 have to renew their licenses every two years. Vision tests are used to assess that important skill, and some drivers may also need to pass a written examination.

In February 2014 the Insurance Institute for Highway Safety’s Highway Loss Data Institute (IIHS) released a report showing that older drivers are now less likely to be involved in a crash and less likely to be injured or killed. The institute attributes the improvement to safer vehicles and better senior health. The report, which tracked data from 1995 to 2012, found that drivers age 70 and over had bigger declines in fatal crash rates per licensed drivers and per vehicle miles traveled than middle-aged drivers, ages 35-54. The trend is significant because older drivers have higher rates of fatal crashes, based on miles driven than any other group except young drivers. Despite the improvement, older drivers continue to have higher rates of fatal crashes than most other age groups.

These studies offer some good news as well. Older drivers seem to be more aware of their weaknesses than drivers in other age groups, and generally, take steps to minimize their time on the road. Many avoid driving at night, or during inclement weather. And even those involved in crashes are found to be wearing seat belts and are much less likely to be under the influence of alcohol than younger drivers.

Obviously, there are challenges for senior drivers that must be met to improve their safety behind the wheel. New safety technology offers a great deal of promise in that area, and increased focus on driver education can help to ensure that older drivers remain cognizant of how their skills can diminish over time. The important thing to remember, though, is that most of the concern focused on the risk posed by elderly drivers is overstated. While there is an increased risk for that most elderly category of drivers, the statistics show that the situation is much less dire than some would suggest.