Risks of Cellphone Use While Driving 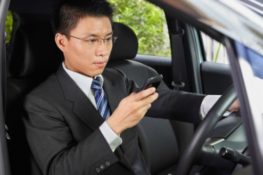 Forty-one states have bans against this type of distracted driving, and another 11 states completely ban drivers from using handheld cellphones in any way while behind the wheel. While laws like these do help to curb some distracted driving, and thus prevent terrible car accidents, recent studies have suggested that this type of legislation falls short of addressing the problem.

A recent study performed by AAA found that when drivers are banned from using handheld cellphones, forcing them to turn to devices like Bluetooth and other hands-free technologies, they are still dangerously distracted.

According to AAA, a driver who is chatting on a hands-free device is twice as distracted as a driver who is not. And, drivers who utilize technologies that allow them to dictate emails or texts face triple the distraction levels of those who are simply driving. So, this study indicates that taking one’s hands off the wheel to type a text may not be the main problem; taking one’s mind off driving is the problem.

The findings seem to make sense. An earlier study that took place in 2008 found that the part of the human brain that is used to drive is the same part that is used to actively listen. This part of the brain does not perform well when forced to do these two tasks at the same time. So, while banning texting and handheld phones may be a start, it is not an end-all solution to preventing distracted driving accidents.

Texas residents should be aware that in order to drive safely, they need to focus on their minds and bodies. This means keeping one’s hands on the wheel and one’s mind on the road.

Distracted driving is one of the biggest and most dangerous car accident risks we face today, and if drivers in Texas commit to focusing their attention on driving safely, many car accidents – as well as injuries and deaths – can be avoided.