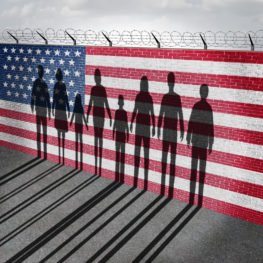 At a press conference organized by Rio Grande Valley Border Patrol sector on Sunday to discuss issues that center around the zero-tolerance policy, Manuel Padilla Jr. – who is currently the chief patrol agent spoke extensively on the policy.

He revealed that the ‘zero tolerance’ policy of the Trump administration which oversees the separation of children from their family will continue. Padilla made this revelation recently to the Washington Post saying that about 568 parents which account for just half of the number of the parents who would have been prosecuted for illegally entering the country have been separated from their children since the ‘zero tolerance’ policy was announced on the 6th of April.

This revelation is coming at a time when outrage is mounting over the Trump administration’s ‘zero tolerance’ policy. Manuel Padilla Jr. The person in charge of the policy on the busiest stretch of the southwest border seems to be unapologetic as he hints that more separation of children and deportation of parents are yet to come.  According to him,  “we are trying to build to a hundred percent prosecution of everybody that is eligible, we are not there yet, but that is our intent.”

He gave several assertions as to the effect of the zero-tolerance policy on the Rio Grande Valley.

14% Of Entire Apprehensions Are Unaccompanied Children

According to Manuel Padilla, of all the entire apprehensions they’ve made so far at the border, ‘unaccompanied children’ amount to about 14,500. This number equals 14% of the total apprehensions recorded at the bother till date. Trying to explain what he means by unaccompanied children, Padilla said he means children who are recovered at the river edges with nobody accompanying them. These children have been separated from their families and there’s no trace of any of their family members coming along with them. Migrant activists have maintained, however, that the policy will not have any significant impact on the number of parents and children illegally crossing the borders as most factors pushing families to America are not going away.

According to the President of the Kids In Need of Defense(KIND) Wendy Young, “it doesn’t matter how cruel we become, families are going to take the risk.”

Padilla on his side remains unmoved and has shrugged off the criticisms saying, “ Really, our mission is border security, and I think now we have a policy that supports securing our borders.”