The Dangers of Tailgating in Corpus Christi 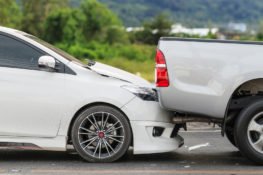 Rear-end accidents are the most common type of car accident, and an overwhelming majority are caused by tailgating. Following too closely behind another car in traffic is dangerous. It doesn’t provide enough space to stop safely. Sometimes people risk the dangers of tailgating out of carelessness. Other times, tailgating is an act of aggressive driving by a driver looking for an opportunity to pass a slower-moving vehicle.

Recent research finds that one in two drivers fails to keep a safe following distance. This report says many tailgaters follow the car ahead of them closely to prevent another driver from cutting in front of them.

The National Highway Traffic Safety Administration (NHTSA) reports that there were 2.1 million rear-end collisions in the U.S. in 2017, representing a third of all collisions. The Texas Department of Transportation (TxDOT) says that in 2018 there were 25,752 vehicles involved in crashes in Texas caused by following too closely.

The tailgating accident attorneys at Herrman & Herrman, P.L.L.C. help victims of “following too closely” accidents seek compensation from at-fault drivers for serious injuries and other losses. We have represented many people injured in rear-end accidents in Corpus Christi and Neuces County. If you have been hit and injured by a driver who was following too closely, contact us in Corpus Christi for a free consultation about your legal options.

Why is Tailgating So Dangerous?

One NHTSA report defined following too closely as following another vehicle so closely that even if the following driver is attentive to the vehicle ahead, he or she could not avoid a collision if the driver in front brakes suddenly.

It takes alert drivers approximately 2 seconds to see a roadway hazard and react to it. The more space a driver allows between his or her vehicle and the vehicle in front, the more time the driver has to see a hazard and react safely.

Drivers need to consider the size and weight of their vehicles when judging a proper following distance. Larger and heavier vehicles need more distance to stop. For example, passenger cars may rely on the “2-second rule.” The Federal Motor Carrier Safety Administration, which regulates commercial trucks, says that truck drivers traveling at 40 mph need to allow 4 seconds between the typical tractor-trailer and the vehicle ahead. “For speeds over 40 mph, you should leave one additional second,” the Federal Motor Carrier Safety Administration tells truck drivers.

The FMCSA’s Large Truck Crash Causation Study reported that 5 percent of truck accidents occurred when the truck driver was following another vehicle too closely.

Speed is the danger factor in tailgating accidents. Because a tailgating driver does not have time to stop, rear-end accidents in traffic often happen at high speed. Speed compounds the impact of a collision, which increases the seriousness of injuries and the likelihood of death.

The most common injury in a rear-end collision is a neck injury known as “whiplash.” The name describes the abrupt over-extension of the neck of the individual struck from behind.

The abrupt back-and-forth movement suffered by vehicle occupants hit in a rear-end accident also can cause injuries to the back and spinal cord.

The impact of the car occupant being slammed against the vehicle’s interior structure can cause:

Severe blows to the head or internal organs, significant blood loss from lacerations, and/or other injuries suffered in rear-end car accidents can also be fatal.

How to Avoid a Car Accident Caused by Tailgating

In most crashes, the driver of the car in the rear is judged to be at fault for a rear-end accident. The tailgating driver may be liable for damages sought in a personal injury or wrongful death claim if others are injured or killed in an accident.

Section 545.062 of the Texas Transportation Code says that when following another vehicle a driver must maintain an assured clear distance between the two vehicles so that, considering the speed of the vehicles and traffic conditions, the driver can safely stop without colliding with the preceding vehicle or veering into another vehicle or object.

To judge what a safe following distance is, when the vehicle in front of you passes a fixed object, you should be able to count at least 2 seconds before you pass the same object. Two seconds is a minimum. Make it a count of 3 or 4 if you drive a larger vehicle, or just for safety’s sake.

Remember to stay farther back from other vehicles in inclement weather, including rain, fog, snow, and ice. Up to 10 seconds in ice and snow is not unreasonable because of the increased stopping distances. When your car starts to slide on ice, you can steer into the slide to maintain directional control, but there’s little you can do to stop your vehicle.

If you are being tailgated, move to the right-hand lane to allow the following driver to pass when it is clearly safe to do so. Find a place where you can safely pull off the road and pull back on after the tailgater has passed. The few minutes lost will be worth your safety and peace of mind.