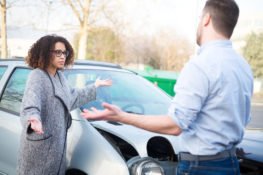 The State of Texas relies heavily on fault determinations in personal injury cases. This means that if someone sustained a physical injury or property damage from an accident, the person who caused the accident will be liable for the damages of the other individual who did not cause the accident.

Several factors play into fault, including proving fault, how fault can be divided between parties and how certain statements can hurt someone’s chances of receiving compensation for damages.

In order to be successful in proving fault, the claimant needs to have strong evidence to support his or her claim that the other driver caused the accident.

One of the strongest forms of evidence that can help produce this proof is a police report. While the police may not come to all accidents, they do if any injuries are reported. In fact, a police report must be made within ten days of an accident if a party involved has suffered bodily injury.

Police officers are trained at reviewing the scene of the accident, taking down all necessary information and making preliminary determinations regarding what occurred and which party may be at fault. Many insurance companies rely heavily on these reports when making claim determinations.

In addition, it helps to get the names and contact information for any individuals who witnessed the accident, as witness statements are extremely important in establishing fault in a car accident.

It helps to also take photographs of the accident scene and vehicle damage as soon as it occurs. Do not assume the police photos will suffice in proving a claim. If the claim goes to court, photographic evidence can be very compelling in proving fault to a jury.

If the claimant has sustained injuries from the accident, medical records will be important in proving the claim. It is important that the person injured keep careful records of all doctor’s visits and an account of what types of medications and what treatments were received and why. Make sure to keep copies of all medical reports since requesting copies of these at a later date can actually be quite expensive.

If the complainant believes that pain and suffering will be requested in the claim, it is also important to keep notes in a daily journal of how he or she feels, how quality of life has changed because of the accident and any other evidence that may be helpful in proving injuries and fault.

Watch What Is Said

Immediately after an accident occurs, it is understandable if both parties are shaken up and stressed due to what just happened. Even minor accidents can be scary for all parties concerned.

The same goes for speaking with insurance companies. If the other party is the one to blame, it is common for their insurance provider to try to get the other person to take some portion of the blame. Do not fall for this trick, and if possible, ask to speak with the insurance company in the presence of an attorney.

The State of Texas follows the rule of comparative negligence.  What this means is fault is divided up proportionately between the parties based on the percentage of negligence their actions played in the accident.

Comparative negligence takes a look at what happened and what each driver did when the accident occurred. A formula determines the percentage of blame each party played in why the accident happened, and the amount a claimant can recover in an accident is reduced by the amount he or she shared in the blame.

Texas follows what is called modified comparative negligence, also known as the 51 percent bar rule, which means that if one driver is more than 50 percent to blame for the accident, he or she is barred from recovery. If the drivers are equally to blame, each driver can recover from the other but only 50 percent of the total award requested. Once one of the driver’s portion of the blame goes over 50 percent, however, he or she is barred from recovering anything.

The attorneys at Herrman & Herrman have over 100 years of combined legal experience representing injured Texas residents. Contact our office today for a free initial consultation and case evaluation. Call Herrman and Herrman today at (361) 792-3669.