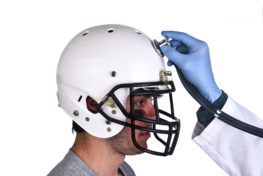 Sport are one of the most popular recreational activities as well as exercises in the world today. This is probably because of its active and participatory nature. Today, it is estimated that more than a quarter of the world’s population are involved in at least, one type of sport, either for professional or leisure purposes.

The benefits of participating in sports are almost unable to count; from helping you to maintain top-tier health, to keeping you fit, among many other reasons. However, there are also a few disadvantages that are associated with sports, and one of them is being at risk of a Traumatic Brain Injury.

What is a Traumatic Brain Injury?

Traumatic Brain Injury is a form of injury to the brain that is often caused by the impact of an external force on the head, which is very likely to lead to a temporary or permanent impairment of physical, cognitive, or psychological functions of the brain.

Oftentimes, Traumatic Brain Injury occurs as a result of a violent jolt or blow to the body or head of an individual. It can also be caused by the penetration of brain tissue by objects such as a bullet, shattered skull pieces, pellets, etc.

The symptoms of Traumatic Brain Injury can be categorized as follows.

How to Prevent Traumatic Brain Injury for Athletes

To reduce the chances of contacting Traumatic Brain Injury during sports, athletes are advised to:

Learn and practice proper techniques to avoid hits in the head;

Limit or control the possibilities of making body contacts during sports;

Put on required safety wears while participating in sports;

Watch out for and avoid impending dangers while participating in sports.

Just as earlier mentioned there are many benefits to playing sports, and there are a few disadvantages, also. In this article, we have discussed all you should know about Traumatic Brain Injury for athletes and how to avoid it in sports.

If you have experienced an injury to the head or other part of the body, and are seeking legal counsel on the best actions to take, call the experienced injury attorneys at Herrman & Herrman now.