How Dangerous Are Hover Boards Anyway? 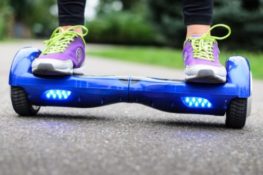 One of the hottest entertainment gifts in recent years is now under fire from the media, government regulators, and private safety advocacy groups. While safety concerns are nothing new, the product in question here has been reported to be one of the more dangerous items to hit the market in some time. It’s called the hoverboard, and it’s been responsible for a rising number of injuries and fire-related accidents that have some demanding for action to be taken in order to protect the public. Of course, if you have yet to hear about these dangers you might be wondering just how risky hoverboards could possibly be.

What is a Hover Board?

If you’ve ever seen any of the Michael J. Fox Back to the Future movies, then you probably think you know what a hoverboard is. In those movies, hoverboards were basically souped-up skateboards – without the wheels – that Marty McFly used to get around during his various adventures. And yes, that hoverboard did indeed hover above the ground. The hoverboards in question here, however, do not actually get off the ground. They’re basically modified skateboards designed for easy balance, with a design that enables riders to stand as they normally would instead of having one foot in front of the other.

At first glance, this sounds like just another transportation-based toy. Obviously, one would assume that there would always be a risk of falling off the device, just as millions of young people routinely fall from their skateboards, scooters, and bicycles. If a few cuts, scrapes, and bruises were the only issue here, chances are that there would be no real controversy or concern. Sadly, however, the risks created by these devices extends far beyond minor bumps and bruises.

According to the US Consumer Product Safety Commission (CPSC), there have been a number of worrisome reports about injuries over the course of the last twelve months. Since the latter part of last summer, there have been more than two-dozen emergency room reports of injuries involving these new devices. The patients involved in those incidents had injuries ranging from lacerations and fractured bones to head injuries.

The devices are already illegal in New York City due to the DMV’s inability to register them, and reports like these make it increasingly likely that other cities may take action to protect their citizens from hoverboard use. Earlier this year, New York’s Police Commissioner cited falls and several reports of fires caused by the devices as reasons to be skeptical about their ability to be used safely.

Fire? They Cause Fires?

The fact that hoverboards have been implicated in a number of fires should come as no surprise to residents of Texas. Shortly after Christmas in 2015, there were reports of a hoverboard combusting inside a mall in Houston. The device was apparently being sold inside the mall, at a kiosk. While there were limited damage and no reported injuries, the incident did cause mall officials to evacuate that floor of the building due to the smoke from the fire.

The people inside that mall were relatively fortunate that day. One Louisiana family was far less fortunate when a hoverboard caught fire while charging and destroyed their entire home. Another report from Alabama involved a man who was riding his hoverboard outside his home only to have the middle section of the device explode right beneath his feet.

The fire safety concerns have become so serious that there are airlines that won’t allow passengers to bring them on planes. One of the world’s largest shopping venues – Amazon – has put policies in place to require vendors to provide safety compliance evidence before they can sell the devices on the company’s website. Overstock.com made a similar announcement as it began barring sales of the devices as well.

Why Are There Fires at All?

Experts who have examined the issue tend to agree that these fires are all related to the batteries used in the devices. Those lithium-ion batteries are commonly found in a wide variety of electronics sold and used safely throughout the United States and around the world. They’re used in smartphones, laptop computers, and many other devices. Of course, there are few battery-related injuries reported from using those devices. So, what makes the hoverboard so different in this regard?

Lithium-ion batteries used in most electronics can still pose a risk to consumers – just like any other kind of battery. However, most electronics are used in a fairly non-physical way. The batteries inside those devices seldom experience serious jolts or jostling. The opposite is true where these hoverboards are concerned. Since hoverboards are designed to be used like bikes, skateboards, and other sports equipment of that nature. Obviously, there is going to be a great deal of impact absorbed by those temperamental batteries, and that places them at greater risk of combusting or simply exploding.

Moreover, recent years have seen a tremendous increase in the number of lithium-ion batteries being made in China. Many of these are low-cost battery units, made in environments that lack the regulatory oversight seen in Europe and the United States. That lack of regulation does help those manufacturers develop less expensive batteries, but it also increases the risk that those low-cost alternative batteries might not be as safe as lithium-ion batteries created by more safety-conscious companies in other countries.

According to recent reports, the CPSC is continuing to examine the issue and the products. Though there are no real standards in place at this point, it is unlikely that the devices will continue to be sold for much longer without some level of regulation and attention to safety concerns. Meanwhile, however, people will continue to be injured while riding these dangerous devices, and more fires will occur. Those injuries and fires are likely to change at least some hoverboard users’ lives in ways they cannot now imagine.

If you or a loved one experience a problem with a defective hoverboard device, you may be entitled to monetary relief. Contact a reliable personal injury attorney today to find out more.