How To Check Your TX Doctor For Previous Medical Malpractice 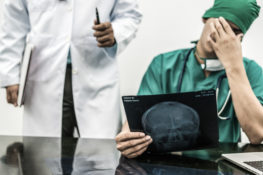 Based on how humans are wired, most patients don’t bother checking or digging into the history of their physicians. Once, someone claims to be a doctor and works in the hospital, people just naturally believe them and consult them for their health challenges.

And this is as a result of the trust that humans have placed in health officials, but according to medical facts and records, these trusts are misplaced because so many doctors are not who they claim to be.

According to stats gotten from the American Medical Association (AMA) and shared on ABC News Network, over 65% of doctors in Washington have been involved in one medical malpractice or the other.

And what this means is that a lot of doctors have been sued or called out for failing to perform their medical duties effectively, and as such can lead to permanent injury or death for the patient.

Medical malpractice varies and the commonest ones include wrong diagnoses of a patient, wrong prescription and failure to intimate patients with the right information about their health challenges and treatments.

And a vivid example of medical malpractice that occurred in Texas, USA; was the case of a Dr. Greggory Phillips, who was sued in 2011 for the death of one of his patients, late Jennifer Chaney who the doctor had started administering wrong medication to since 2008.

Jennifer wasn’t the only patient who suffered from Phillip’s malpractice, another woman also died from drug misadministration in 2008.

After a few years of legal investigation, Phillip was found guilty and his license was revoked.

Although this news can be alarming and can create fears in the hearts of patients who see doctors regularly, there are ways through which you as a patient can dig into your own Tx doctor’s or health official’s medical background and find out if he/she has ever been involved in medical malpractice previously.

How To Know If Your Texan Doctor Has Ever Been Involved In Medical Malpractice.

Look Out For Their License

One of the best ways to find out if your Tx doctor has been a medical offender at any point in their practice is to check their license.

If their license has been suspended or revoked, that is a pointer that they have been involved in punishable medical offenses at some point in their life.

Each state in the United States of America has a medical board that is in charge of doctors’ licensing and disciplinary issues.

The state of Texas is no exception and you can check out information about your doctor on your state medical board’s website.

You can find the website for Texas State Medical Board here.

DocInfo is created by the Federation of State Medical Boards, and it is a database that contains a wide range of information about doctors, such as educational history, credentials, certifications, licenses, sanctions and other important information.

Unlike DocFinder, DocInfo is not free and you might have to part with as much as $10 for the information you seek.

If your Texan doctor has been involved in any medical malpractice, be rest assured that your state’s court would have a record of it.

To have the information you seek, you can visit or call the Court clerk in Texas.

This website is run by Administrators in Medicine (AIM), an organization that helps to compile information about doctors.

Do a Google search

Using search engines such as Google or Yahoo is one sure way of getting news and information fast.

To aid your background search on your Texas doctor, just type in their name followed by some keywords like “license revoking”, “medical malpractice” “lawsuit”, and “license suspension”.

Getting medical help is important, but what is most important is knowing who you are getting the help from because not all doctors are life-givers, some are life takers.

Therefore, for you not to end up dead or worse, it is expedient that you check out who your doctor is and if he/she has a previous case of medical malpractice.