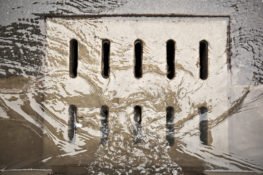 McAllen voters opted in favor of $22 million toward drainage upgrades and $3 million for traffic improvements on Saturday as the city’s two-proposition bond election passed by a comfortable margin.

City officials were disappointed by the turnout on election day, despite their efforts hosting town halls and meeting with private groups to present information about the two propositions, one of which was for drainage improvements and the other for traffic improvements.

The $22 million for drainage will go toward 23 improvement projects throughout McAllen as part of the city’s $46 million master plan.

“We need to make sure citizens are engaged,” Mayor Jim Darling said at Monday’s commission meeting.

Commissioner Joaquin “J.J.” Zamora had similar thoughts about the turnout.

The second proposition will steer $3 million for traffic control improvements, including traffic signal synchronization, hardware, fiber and new equipment to help reduce accidents. In respect to the drainage item, Rodriguez said the city has begun the request for quotation process where the city will eventually hire a group of engineers to do the design work for the various drainage projects associated with the proposition.

Work on the two projects will begin Sunday, according to City Manager Roel “Roy” Rodriguez. He said he was especially proud of “my community, my city commission and most importantly of my staff.”