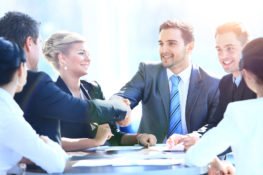 Imagine a couple and their child are traveling along when they are suddenly and unexpectedly involved in a car accident.  In the car with them are another couple and their child.  These two families are close friends and, unfortunately, have all suffered pretty substantial injuries.  The vehicle that hit them is deemed liable for the accident.  What happens next?

This scenario plays out quite often and can lead to many different outcomes.  A lot of times, the families may decide to all sign contracts with the same attorney.  Maybe one of the families has a close friend or an attorney they have worked with previously.  Other times, the two families may each get a different attorney.  Sometimes, neither family may involve an attorney and try to handle the claim on their own.  Let’s say these two families sign up with the same law firm.  What does this mean?

This is what is referred to as “multiple representation” and most attorney contracts should have a clause addressing this.  Essentially, the clients are giving the attorney the OK to represent both their family and the other family, acknowledging that this could potentially mean competing interests.  The attorney accepting this agreement has an ethical duty to ensure that the potential clients do not have interests materially and directly adverse to each other, amongst other duties.  For example, in the hypothetical above, let’s say the at-fault driver had a minimum policy ($60,000.00 per incident in the state of Texas) and that there were three people in each family, so six people were involved in the wreck.  It does not appear that any fault will be placed on the family driving the vehicle.

Clearly, that may not be enough money to go around for six people.  There are two ways to look at the above example.  One way is to think that having one attorney representing both families prevents fighting amongst the groups and that this may be the fairest and most efficient way to divide the insurance proceeds.  It could potentially save a lot of time and legal costs to have everyone on the same team, pushing towards a common goal.

Another way to look at it could be one family feeling as though they need an attorney looking out for their interest alone and that the other family should do the same, as there may not seem to be enough money to cover everyone’s outstanding bills, let alone pain and suffering.  This happens quite often as well.

This is a personal decision that everyone must make for themselves.  In scenarios like above, if an attorney determines that the potential clients do not have competing interests in a potential lawsuit, they could consider signing both families to a contract.

Which approach is superior is usually best determined on a case by case basis.  If you were involved in an accident and feel like you may need representation, please feel free to contact Herrman & Herrman, P.L.L.C. for a free case consultation today.