Home Blog Articles Who is Liable for Public Transportation Injuries?

Who is Liable for Public Transportation Injuries? 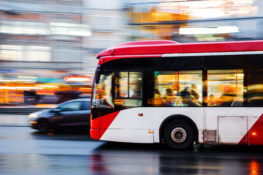 However, the nature of the vehicles makes them open to peculiar accidents like falling, stampedes, and loads-becoming-projectiles. Knowing this, public transportation drivers always tend to be more cautious because the passengers are at risk of getting injured even without a collision. But what happens when a passenger gets injured regardless of the driver’s caution?

Who is Responsible for Public Transportation Accidents?

A passenger may get injured on a means of public transport due to negligence on the driver’s side, the passenger’s or a third-party. Generally, the owner of the public transportation company in question is liable to pay for any resulting accidents but that is if the injured can prove that the driver was negligent.

Say, for example, a passenger is walking from his seat to talk to a friend seated elsewhere and the bus suddenly stops to prevent a collision with a careless driver. The passenger may fall and sustain any degree of injuries and without minding what happened, proceed to lay claims. Sadly, it doesn’t work that way.

After laying claims, the injured would need to provide enough proof that the accident was the driver’s fault and in the case mentioned above, it wasn’t. If the driver had been involved in a conversation or appeared to be sleeping off when the accident occurred, then the injured can very well go ahead with his claims.

If you have been injured in an accident while using public transportation, you need an experienced personal injury lawyer on your side. At Herrman & Herrman, our seasoned attorneys will fight for your right to compensation. Contact us now to schedule your free consultation.