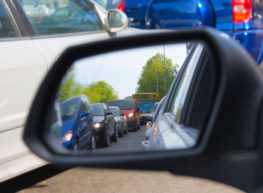 Over the course of the last four decades, there has been tremendous progress in the area of traffic safety. New safety regulations have expanded efforts to educate drivers about the most common causes of traffic accidents resulting in a gradual decline in traffic fatalities. In fact, the National Highway Traffic Safety Administration (NHTSA) reports that the last decade saw a 25% reduction in fatalities and a 13% decline in traffic injuries. All of that is great news for drivers, of course, but any celebration would be premature. The fact is that there are still many causes of traffic accidents that can and should be prevented.

Why You Shouldn’t be Distracted when Driving

Distracted driving carries huge risks, and these risks can result in major disasters. Texting behind the wheel is a clear example of this danger. Studies have shown that even a glance at a cell phone can lose visual contact with the road for roughly five seconds. If you’re on the highway or interstate, your car can travel more than a football field’s length in that short amount of time. No person in their right state of mind would ever contemplate driving that distance without looking at the road.

It is bad enough that the federal government estimates that some form of distraction causes 16% of all crash-related deaths in the U.S. Furthermore, research from the AAA Foundation suggests that distraction is an even bigger issue than the numbers might indicate. Through their studies, they found a residual effect caused by the distraction that can result in drivers continuing to be less attentive to the road for an average of 27 seconds after the distraction ends.

Distracted driving appears to be especially prevalent among teenage drivers, with roughly 60% of all crashes involving teens. These distractions can vary from conversations with others inside the vehicle (15% of crashes), being on the phone (12%), to being distracted by something inside (10%) or outside (9%) of the vehicle.

Take rubbernecking, for example. According to some estimates, drivers actually spend a little more than half of their time behind the wheel paying attention to something other than the road.

When driving, rubbernecking refers to the driver’s action of slowing down in order to try and catch a glimpse of a road accident, damaged vehicle, an arrest or any unusual event that may create curiosity, often in their rear view mirror. And as a result, a rear-end collision may occur as the car behind them may not have time to react.

Where rubbernecking is concerned, the issue can become frustrating for experts as this is an entirely preventable behavior. The fact is that we all have moments during any trip when we find ourselves momentarily distracted. It is almost unavoidable. Your baby in the backseat could start crying, another driver could startle you by honking his car horn, or an insect could decide to land on your nose. Distractions happen, and many are unexpected.

Rubbernecking is something different than that, though. Rubbernecking involves a conscious decision to stare at something outside your car rather than paying attention to the road. Typically, this behavior involves staring at a vehicular accident. In many instances, drivers will slow down and even bring traffic to a standstill as they try to satisfy their curiosity and get a better look at the aftermath of a collision.

However, there are times when drivers cannot seem to stop themselves from staring at wrecked cars, injured travelers, or the emergency workers who are trying to help them. It would be bad enough if rubbernecking resulted in nothing more than a minor delay for other drivers as traffic slowed to a crawl. Unfortunately, rubbernecking can lead to additional accidents as drivers suffering from such distractions often end up crashing themselves.

It is important to recognize that most of us have been guilty of this at least once or twice in our lives. After all, there is a natural tendency to want to see what caused your traffic delay – even if you are moments away from railing against the drivers in front of you for doing the same thing.

The good news is that some people are working to resolve the problem. The United Kingdom’s Highways Agency has been using screens to block off the areas around traffic accidents and has reported positive results to reduce rubbernecking. Solutions of this kind can help prevent this type of distracted driving by reducing the visual incentive to stop and stare. This enables traffic to continue apace while eliminating a distraction that might otherwise result in additional accidents, injuries, or even deaths.

Automobile accidents resulting from distracted driving can devastate finances and create physical, mental, and emotional trauma that can impact you for years to come. Fortunately, most people can limit their distractions once they are aware of the problem, which can help make everyone safer on the road. If you or a loved one has been involved in any traffic accident, contact Herrman & Herrman, P.L.L.C., to seek appropriate legal help and start resolving your case.