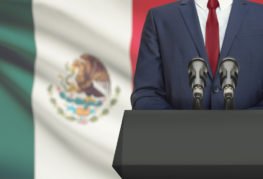 Our neighbors to the south have elected a new President. Andres Manuel Lopez Obrador has claimed victory in Mexico’s election this year. One of the first things he did as the new commander in chief of Mexico is reaching out to President Donald Trump of the United States.

Reaching a New Deal With NAFTA

The new Mexican President thanked President Donald Trump for congratulating him and said he would like to work on reaching a new deal. The “new deal” he is referring to is the NAFTA, North American Free Trade Agreement. “We are conscious of the need to maintain good relations with the United States,” said Lopez Obrador.

The overall goal of NAFTA is to eliminate trade barriers between the United States, Canada, and Mexico. It was first implemented in 1994. Per the NAFTA agreement, “The NAFTA Secretariat is a unique organization established pursuant to Article 2002 of the North American Free Trade Agreement (NAFTA). It administers the mechanisms specified under the NAFTA to resolve trade disputes between national industries and/or governments in a timely and impartial manner.

A similar administrative body, the Binational Secretariat, existed under the Canada – United States Free Trade Agreement to administer the dispute settlement provisions of that Agreement. It consisted of two offices, known as national sections, one in Ottawa and one in Washington, D.C.

President Lopez Obrador has been compared to President Trump for his views as being considered a nationalist. He has also recently expressed his own skepticism about NAFTA in the past. “I confess that I have a legitimate ambition: I want to go down in history as a good President of Mexico…I desire with all my soul to raise the greatness of our country high.”

It is exciting news for Mexico that another president has been elected. Here, in the United States, we look forward to building on our already strong relationship that we have built with Mexico throughout the history of our two countries. We expect nothing but continued growth from Mexico as they are constantly evolving and developing into a new world power.