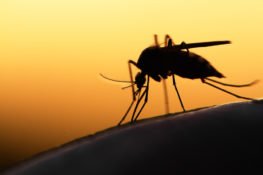 The recent rise in temperature and rainy weather has created a surge of mosquitoes in the Rio Grande Valley. The high number of mosquitoes in the area has caused some concern among the general public. The City of McAllen is taking measure to spray the residential areas and control the mosquito population as much as possible. The city almost uses 55 gallons of insecticides each year to spray on mosquitoes. Workers have been more active this year and targeting mosquito breeding areas like wetlands and water pools.

The workers use a spraying machine and low-tech trap equipment to attract mosquitoes. The trap is built with a light and fan. Once the mosquitoes get stuck in the trap, they are sent to the lab to test for Zika virus, dengue fever and other illnesses that can be passed through mosquito bites. Last year, a resident was tested positive for Zika virus, so the health department of South Texas is taking extra precaution this time.

Some residents in McAllen have developed their own solution to the mosquito problem. One respondent suggested that she takes a bottle, cuts it in half and fills the bottom half with sugary syrup and yeast. Then she flips it over and tapes the top part of the bottle. Once the mosquitoes get trapped inside, there is no way for them to get out. She said that this is a simple and cost-effective solution to the mosquito problem that the city of McAllen has been facing.

The department of health has taken their own measures to educate the people about the mosquito infestation and how to protect themselves from it. The city of McAllen’s Health & Code Enforcement Director, Steven Kotsatos, has advised the community to remove tires and containers from their homes that can store more than an inch of water as it can become a breeding ground for mosquitoes. He has also suggested that residents clean their drains and gutters to ensure that mosquitoes don’t find a hiding spot near their houses.

The State Health Services of South Texas have issues some additional recommendations to help people protect themselves from being bitten by mosquitoes. The most important guideline is to use EPA-approved mosquito repellant every time you or your family steps outside the house. Another precaution is to screen doors and windows to keep the mosquitoes out of the house. It is best advised to limit outdoor activities as much as possible during peak mosquito season. Also, if you do go out, cover yourself and the kids in long-sleeved t-shirts and long pants. Clear any standing water near your house or its surroundings.

Mosquitoes can travel easily in subtropical climates and spread to larger areas. That is why the nearby cities of McAllen and neighboring areas of Hidalgo County have also started taking preventive measures to contain the spread of mosquitoes as much as possible and protect the people of Rio Grande Valley against the Zika disease. The city workers have been repetitively spraying mosquito-infested areas between the hours of 9 pm and midnight to fight off the growing mosquito population.