Driving Safely In Fog: Facts and Tips You Need to Know 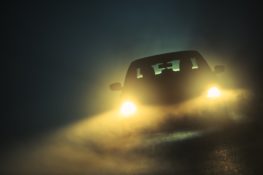 For drivers in Texas and around the world, driving can become so familiar that it is easy to forget about just how dangerous automobile travel really is. Driver fatigue, recklessness, and various types of distractions can all pose risks during any vehicular journey. Fortunately, those are all hazards that can be avoided by drivers savvy enough to make sound decisions. Sometimes, however, there are hazards that lie outside of our control, like inclement weather conditions. Fog is one example of the type of dangerous weather conditions that can pose special risks for everyone on the road. As a result, driving safely in fog is a skill set that every responsible driver must learn.

Why Is Fog Dangerous?

In the movies, fog is often used to create a sense of danger. Classic horror films used this ambiance to ideal effect, as viewers were often left with the eerie sense that almost any hazard could lurk within that murky haze. Well, fog on the road should give you that same sensation. In fact, you would be wise to be even more alert during foggy road conditions, since the real-life dangers that you cannot see on the road are ones that could alter your life forever – in the worst ways.

The problem with fog is that the most obvious safety tip – which is to avoid driving in it at all – is simply not always possible. Few drivers examine the weather forecast each day to prepare for inclement conditions like fog. And even if they did, a clear forecast would be no guarantee that fog might not suddenly appear anyway. Because it can be so unpredictable, drivers always need to be alert so that they can react when they encounter it.

Fog is basically a ground-level cloud that is composed of miniscule drops of water that can be as compact as ½ ml of water for every cubic meter. There are two main dangers involved with fog on the road, and they are both related to the fact that fog reduces visibility. First, foggy conditions make it difficult to see your surroundings, other vehicles, and even the road itself in more extreme cases. Second, fog impairs speed perception, since a large part of that perception relies upon visual cues from our surroundings.

Of course, there is more to fog’s threat than just how it impacts one driver. In fact, this weather condition negatively affects traffic flow and the decisions all drivers make while operating their vehicles. Fog impacts travel time, affects the speed at which travel flows, and disrupts that flow. Drivers respond to these conditions in different ways, as their behavior adjusts in accordance with each driver’s capabilities and experience.

Fog’s Impact across the United States

If fog sounds like a minor inconvenience or something that should be easily managed by most drivers, think again. The number of accidents, injuries, and deaths caused by this phenomenon each year might surprise you. Consider this fact: in just the ten year period between 2004 and 2013, the Federal Highway Administration recorded around 1.25 million vehicular accidents that were directly attributable to weather conditions. Fog alone accounted for 28,533 car and truck crashes, 10,448 injured persons, and 495 fatalities.

A Look at Texas Fog Statistics

To consider how fog impacts people at the state level, a look at the state of Texas can be instructive. The Texas Department of Transportation’s assessment of weather-related traffic accidents for 2016 reveals that there were 2,430 reported crashes due to foggy conditions, including 45 fatalities.

There are some common sense steps to take when you are confronted with fog or similar low-visibility conditions:

Understand that fog is most common during the early morning and evening. When you are making travel plans, try to schedule your driving in a way that avoids those more hazardous times. In addition, don’t forget to expand the safety cushion between you and any vehicles in front of you, and keep an eye out for other vehicles that may be stopped or moving slower than you. To avoid becoming another traffic statistic, it is important to learn all that you can about the many weather hazards awaiting you on the road. By recognizing the danger posed by weather such as fog, and following a few common sense driving guidelines, you can better protect yourself and others from any dangerous driving conditions.