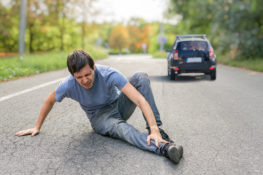 There are many forms of road accidents and road crimes, all causing pain, physically and emotionally to the victims involved. One of such accidents is the Hit and Run.

In this article, we listed a few sanctions covering this crime as well as what to expect should you take action against it:

Specifics of hit and run

Hit and runs are usually accidents involving moving cars but are not secluded to that alone. It can also be a moving car crashing:

Other still objects or property.

The misdemeanor tag often suggests there are little to no consequences for the offender but that’s wrong. Most states dish out fines as much as $5, 000 and significant jail time of a year.

On the other hand, if the accident has to the with the moving car crashing a pedestrian or cyclist or crashing another vehicle with occupants within it and the driver doesn’t step down to view the level of casualty, offer assistance to the injured or affected victims or simply identify himself, such an act is considered to be a felony.

As a felony, the offender faces severe charges and penalties including; fines within the range of $5, 000 to $20, 000 depending on the state.

The offender also risks facing jail time for as long as 15 years depending also on the state in question and the severity of the harm done to the victims.

Hit and run offenders aren’t only subject to criminal laws and penalties. Regardless of whether it’s a misdemeanor or a felony, a hit and run offender also risks facing administrative penalties imposed by most states. These penalties include suspension automatically or total revocation of driver’s license for six months or in some cases, more.

The victims of hit and run accidents hold the right to sue the offender to court for any damages they might have suffered as a result.

The victim may choose to ask for compensation in the form of money due to damaged property, wages lost and sorting medical bills if need be.

Added to the above fines and sanctions, many insurance companies opt to cancel automobile insurances for offenders.

So it is advisable and smart that you drive more careful out there. If you’re a victim, seek justice.